After watching the Hobbit movie twice at the cinema in a span of two weeks, my fascination with hobbit houses has come back to haunt me. It haunts me as it feels like I will never own one… It mesmerises me as it makes me think, and hope. Life can be so unpredictable at times.

During one of researches online about hobbit houses, I came across a story about a couple who were given a plot for free in Wales to build a hobbit inspired house. The couple have moved from this house a few years back and are now building a bigger house in West Wales. The original hobbit house, looks like it is now demolished or in the process to be demolished… Not because it was structurally built badly, but because they never got the permissions to build it. Shame really. I think it would have been a great local attraction! 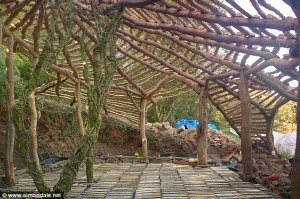 In one of the interviews they had, they explained how the house only costed them £3,000. They mention that this is due to the fact that the house was mainly built with natural materials and scrapped items.

The house was built in 4 months, mostly consists of wood and is dug into a hillside.the roof was covered with a layer of earth, has grass on which helps blend the house into its surrounding.

The house is using sustainable material and energy throughout; lime plaster instead of cement, a fridge which remains cool due to ventilation coming from beneath the foundation and compost toilet. A wood burner was used to heat up the house. 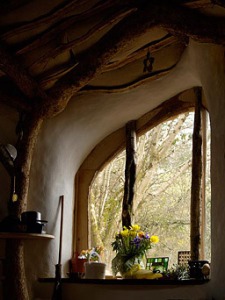 I would actually love to get the opportunity to build and have such a lovely home. I do love cities, but I do love being in the country side, enjoying nature itself. Tell me the truth… can’t you imagine yourself sitting right here?